All You Need To Know About The B Button Emoji

Since 2010, Emojis have become a part of people’s day-to-day communications, and from then on, they have started to evolve now and then. Although some characters are essential, there are also some uncommon ones, such as the B emoji. 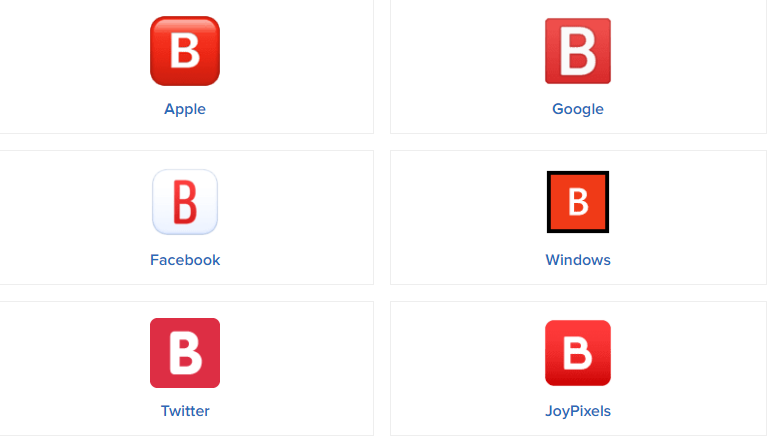 The B button emoji was added to Emoji version 6.0 when it was introduced in 2010 as a qualified part of Unicode 6.0 with a codepoint 1F171 FE0F. The emoji described is shown in capital letter B placed inside a red square. This emoji has no other variations.

The B Button emoji represents the Blood Type letter B, which also has a naming variation of “blood type” and “B button.” It is a part of the symbols or alphanumeric symbols category with keywords such as B button (blood type) and blood type.

How to Type the B Button

The easiest method in typing the B emoji is to make use of your emoji keyboard; you can download it in when using mobiles. Although even without the emoji keyboard, one easy step to type it for both computer and mobile is to select and copy this symbol 🅱️ and then paste it to your typed message. The logo may initially appear in black and white, but it will be automatically converted into a colored one once posted.

Other Platforms and Related Emojis

Other platforms such as Apple, Microsoft, Samsung, Twitter, Facebook Messenger, etc. have their version of the B button, but having the color red as part of the picture symbol remains the same for them. There are also related emojis showing different blood types; the only difference shown is the letters placed inside of the square. Examples include the AB Button, A Button, and O Button.

Other Representation of B Emoji

There are instances where the B button emoji also serves as a reference to the blood transfusion symbol. At the same time, it also set off as a trend in the online world at a time when it became a form of creative replacement for any consonant letter to emphasize a word or point. It is best that to avoid any misunderstanding, it may be helpful first to note the symbol’s context in a sentence before using it.

In general, emojis exist to entertain people and to improve our daily conversations by being creative. It may seem uncommon that the B Button initially represents the blood type symbol, but still, as inventive as we are, the possibilities of using it in different ways are there. It’s just a matter of typing it into your keyboard or copy and pasting it!

Is Bitcoin Worth Investing In or Not?

Here‘s Why Proxies are Essential for Travel Fare Aggregators