Labrador Retriever is one of the most popular dog breeds not only in the United States of America but in the entire world. It is usually the go-to breed for people with families and children, and that’s because they are known to be gentle and friendly towards basically everyone around them, including other pets as well.

If you’ve decided to get a Labrador Retriever, I have to say that you’ve made the right decision and that I cannot think of one reason why you should change your mind. Read this to get some more useful info about this breed.

Of course, just because there is absolutely no reason why you should change your mind and reconsider this decision, it doesn’t mean that you shouldn’t do your best to learn as much as possible about these canines before you bring them home.

After all, learning about the personality and the temperament of your future pets is extremely important, because you want to know precisely what to expect once you adopt your new puppy.

While you will undeniably love the personality of Labrador Retrievers, getting properly informed is rather important, as it will help you understand your animal better, learn how to train it, as well as how to keep it healthy and happy.

Every single owner should learn about the personality and temperament of their future pets and you are not an exception to that rule.

So, if you are interested in getting a Labrador Retriever, then you should definitely start learning about it right away. If you read on, you will get a lot of useful facts about the personality of the breed, as well as about its temperament. 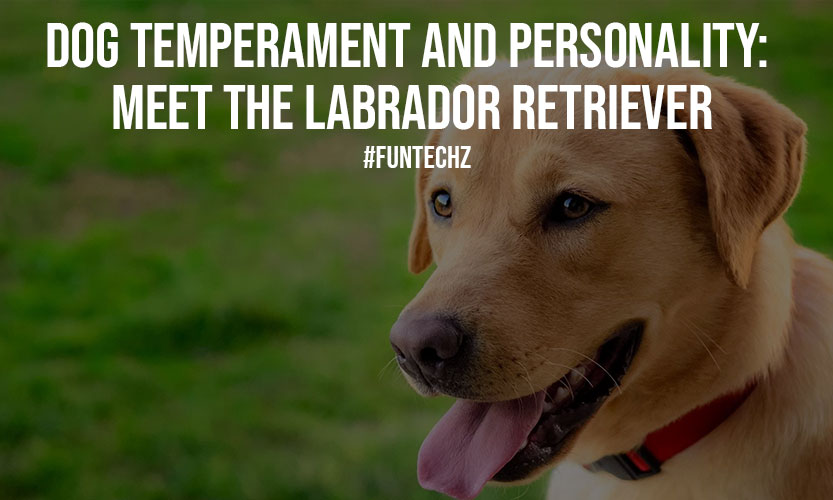 Let us take it one step at a time.

One quick look at a Labrador Retriever will make you think that you are dealing with a mild, kind-natured, and calm animal that will always remain composed and collected regardless of the type of situation that comes its way.

As looks can be deceiving, though, you might start wondering whether the appearance and your general first impression of these animals might be wrong. Well, let me clear things up for you and tell you that this type of the first impression is most definitely not wrong.

This is why the Labrador Retriever is the most popular breed: https://www.reuters.com/article/us-usa-dogs-most-popular-idUSKCN1R11KW

So, the first impression that I have described above is definitely not wrong. In other words, the Labrador Retriever is most certainly a mild and kind-natured animal that will know how to stay calm and collected in most situations.

This is precisely what makes them amazing around kids and other animals. These dogs are easy-going and extremely tolerant towards both people and animals, which only contributes to their reputation as kind pets.

This, however, does not mean that the Labrador Retriever will spend its time lying around and peacefully observing the situation.

In fact, it is actually rather active and loves to participate in all kinds of events, especially those including water. Another thing that makes them amazing is the little detail that they tend to behave as small puppies even when they reach old age.

Yet, their protective instincts will kick in early on and continue to be present throughout their entire lives.

As you might have thought, though, there are always exceptions to this specific rule. To put it differently, while these dogs are generally good-natured, there are instances of bad temper and aggression in the breed.

This can be caused by poor genes or poor upbringing, but we need to emphasize that it is definitely not the norm. Quite on the contrary, this is actually a rather rare occurrence.

When talking about the Labrador Retriever temperament and personality, we must not forget to mention their playful nature and the often goofy behavior that makes them look like true comedians. This is why people are generally convinced that these dogs actually have a sense of humor and a great one for that matter.

You might think that they will grow out of this personality trait eventually, but that is not quite correct. In fact, they will most likely remain goofy and funny even in their old age. So, if you are looking for a dog with a sense of humor, you should definitely consider this breed.

You have to understand, though, that their personality will differ from one individual dog to another. Yet, they all generally tend to be clumsy and silly, especially while they are still puppies. Even though they are known as true comedians, the truth is that this isn’t their most important personality trait.

If we were to single out one trait that could define them completely, then it would be loyalty. They will do absolutely everything for the people they love, which is precisely why everyone loves them so much.

Apart from that, they are capable of anticipating your needs and desires even if you don’t clearly show them, which speaks in favor of their intelligence and their instincts. Additionally, they are also rather hard-working and diligent, which makes them the perfect helpers in any kind of situation.

The best part is, they will enjoy helping out. So, if you are looking for a kind and loving dog that will be there for you in both great and bad situations, then you should undeniably consider getting the Labrador Retriever.

Given their personality, it’s no wonder that they are the most popular breed in the world.